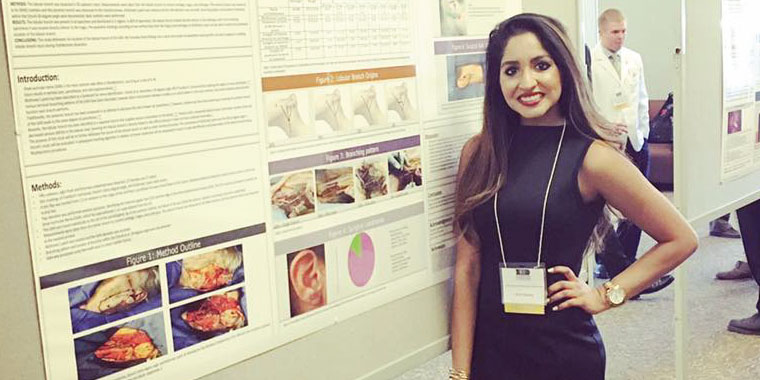 The identification of simple intraoperative markings, which can assist surgeons in avoiding lobular branch injury during rhytidectomy dissection, is the subject of research conducted by KCU student doctor Vicki Sharma. The findings were published in the February 2017 issue of Plastic and Reconstructive Surgery.

Sharma is a DO/MBA/MS candidate in the College of Osteopathic Medicine (COM) Class of 2018, as well as a clinical anatomy fellow for the 2015-2016 school year. She intends to pursue a career in surgery following graduation and jumped at the chance to hone her surgical skills when offered the fellowship in 2015. When Sharma began looking for her research project, she knew she wanted to study an area where surgical outcomes, both intraoperatively and postoperatively, could be improved.

“I knew I would be given an opportunity to learn and improve technique when I became a fellow,” said Sharma. “I’ve been very fortunate to work alongside several extremely gifted and knowledgeable mentors and instructors.”

Under the guidance of Dr. Chris Surek, a 2011 graduate of KCU-COM and plastic surgery resident at University of Kansas Medical Center, Sharma’s research into current literature uncovered a lack of understanding of the preservation of existing branches of the great auricular nerve (GAN) during rhytidectomies.

However, the problem was that no methodology existed to efficiently and accurately determine the topographic location of the lobular branch. Sharma’s research addressed that problem, translating her findings into simple intraoperative markings that can assist surgeons in avoiding lobular branch injury during rhytidectomy dissection.

“What is the Lobular Branch of the Great Auricular Nerve? Anatomical Description and Significance in Rhytidectomy” was co-authored by Surek, and Drs. Robert Stephens and Barth Wright of KCU.

“I think it’s extremely important for surgeons to consistently improve techniques to decrease side effects postoperatively,” noted Sharma. “I believe our findings will serve surgeons and their patients very well as we seek to improve surgical outcomes for the future.”

“It Was Easily the Most Terrifying 38 Minutes of My Life”

Social Medicine: How to Help Without Harming

I spent a month this summer learning alongside 10 Haitian medical students and 10 international...